Warming Up to Uncle Joe 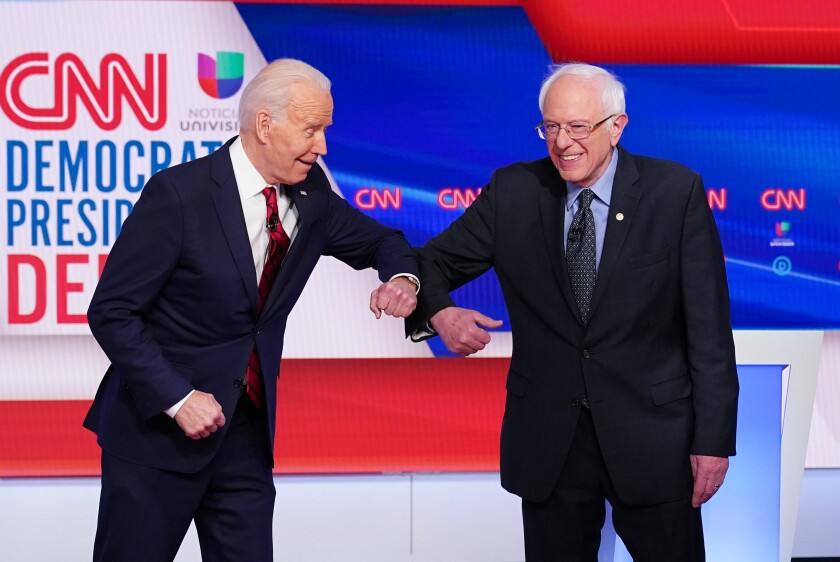 This is how I greeted kids arriving at the music room last week.

It's come down to which uncle I'd rather have in charge of the country.

I'm fond of Uncle Bernie. When there's a family argument, I can always count on Bernie to be on the right side of issues, and to argue his points vigorously and with unshakeable certainty. Bernie knows he's right, and when you're right, why even consider compromise?

And Uncle Joe can be a bit foggy at times. He's not always sure what his position on issues is. He's spent so much of his life hashing out compromises that it can be hard to know where he stands on anything. Sometimes his faulty memory leads him to rattle off a story that just isn't true.

One would think, then, that given Bernie's rectitude on so many moral and social issues, the choice should be easy. But stop a moment to consider what we're talking about here: the softest of sciences, politics. Even dealing with hard scientific facts, politics has to be squishy. Political decision-making rarely comes down to a simple choice between right and wrong. We've had almost twelve years now of Republican Congressional refusal to accept simple facts about climate change, health care, and a host of other science-grounded issues. The Affordable Care Act turned out as complex as it did because without the manifold compromises that went into it, it never would've made it out of committee.

Uncle Bernie can say with absolute certainty that Americans would be better off with a single payer health system. I believe this wholeheartedly. Knowing it's right doesn't make it accomplishable, though: there's a multi-billion-dollar industry that's dedicated to keeping the economics of health care firmly within its profit-crazed grasp. Until the nation as a whole is prepared to reject private health insurance, and with it the politicians who keep it alive, we're stuck with it.

That's not a good enough answer for Uncle Bernie. It shouldn't be, for any of us. But it's the answer that's there.

Uncle Joe gets this. He was in the thick of the struggle to create the ACA. He oversells its virtues now--it really is a hideously complex way of expanding health care--but he's absolutely right to defend it. It's the kind of compromise that results when everyone gets heard, whether or not they sign on to the end product (and not a single Republican legislator did). If he was defending it in the same way Uncle Bernie defends his policies, we'd be in trouble; but that's not who Uncle Joe is.

And that's why I am now going to depart from the whole part of this conversation that is policy-driven. You see, this election is not about policy. If it was, Aunt Elizabeth would still be in it. So would Uncle Pete. This is a shame for those of us who are policy wonks, and would love to spend the rest of the election arguing the finer points of bankruptcy law, student loan finance, or any of the talking points that make up most debates. The profound indifference of the American people to these debates reflects how inconsequential policy is at the moment.

One of the most frequent criticisms of the Biden campaign has been that it's light on policy. Joe Biden has presented himself as a deal-broker, a defender of President Obama's legacy, and as a clear and temperamental alternative to the narcissistic monster now occupying the oval office. In last night's debate, Bernie Sanders hammered him for his long legislative record, chock-full as it is of compromises and strategic votes. If this were a Senate election, that would make sense. But Joe Biden hasn't been a Senator since 2008. The relevant part of his record is what he did as Vice President--and it's hard not to acknowledge that in that role, he was exemplary.

More importantly, there's Joe Biden's record as a human being. Many Republicans will acknowledge that Donald Trump is not a nice man, that he is, in fact, a horrible person. He gets their support, to the extent that he does, because he's a useful tool: he's stacking the courts with young judges who will promote the conservative agenda, while promoting the pro-business policies Republicans love.

He's also utterly incompetent, and his ego is costing the global economy trillions of dollars, while putting the lives of millions at risk. His self-serving denialism about the dangers of the Covid-19 epidemic guaranteed the deaths of many Americans who need not ever have contracted the disease. His fixation on poll numbers and tv ratings turned a cruise liner into a colossal disease vector. His administration's dismantling of a task force dedicated to handling international pandemics was mind-bogglingly shortsighted. He ignores science, fires advisers whose opinions he finds objectionable, blathers falsehoods during televised addresses that should be reassuring but are instead terrifying, insults world leaders...the list goes on and on.

Contrast this monster with Uncle Joe. Joe Biden is a man of deep emotion who cares about other people. He's experienced tragic loss, and is quick to reach out to others facing bereavement. He models a humanistic approach to life that is a polar opposite to Trump's dualistic, opportunistic theory of human relations. Uncle Joe knows there's much more to people than where they stand on issues, or what can be gotten from them. His friendship with John McCain was famous for the way it transcended partisanship. He embodied the political ethic Barack Obama preached, but could not always live out himself: that people are bigger than their opinions. It's an old-school approach to politics, but at a time when Congress is gridlocked on almost every issue, it's an approach that's needed.

But again, this election is not about achieving policy goals. It's about having a person at the Resolute Desk whose resolve is to bring people together, someone who cares about Americans not just because he needs their votes, but because they're human beings. It's about having a chief executive who will fill the Cabinet with competent, intelligent, experienced leaders, and will then listen to their advice before making informed decisions. It's about turning on the tv to hear what the President has to say, rather than waiting for the speech to be over and reading summaries of it because I can't stand to hear a single word out of the mouth of that would-be tyrant. It's about having someone in office who can comfort the afflicted--and four years of Trump will leave the world with far more in that category than when he came to office.

Yes, of course we need to afflict the comfortable at the same time. But America doesn't want an arguer-in-chief. The righteous afflicters of the world will continue to argue their points, whether or not they're President. I hope Elizabeth Warren becomes part of the Biden Cabinet. I know Bernie Sanders will continue hammering all the social nails he's devoted his life to. When Biden talks about having a Cabinet that looks like America, he's not just talking looks. I believe he'll bring in a diversity of opinions, as well.

All of that could still break on the unyielding selfish dumbness of Mitch McConnell, hopefully relegated for the rest of his career to Senate minority leader, but one never knows how these things will ultimately come out. That's again beside the point. When a patient is recovering from trauma, there are many concerns that must be secondary to the task of coming back from the brink. We've been teetering on the edge of a cliff for three and a half years now, and we need some time to just get over not being on the edge. Biden can be for us what Ford was for post-Watergate America: a decent, calming presence, assuring us that we're in good hands, and he's going to gently guide us back onto the progressive track we were derailed from by Trumpism.

These are the reasons I believe America is warming to the idea of a Biden Presidency--and why it may just be the best thing that's happened to us in a very long time.
2020 presidential campaign Bernie Sanders Donald Trump Joe Biden
Location: Portland, OR 97229, USA