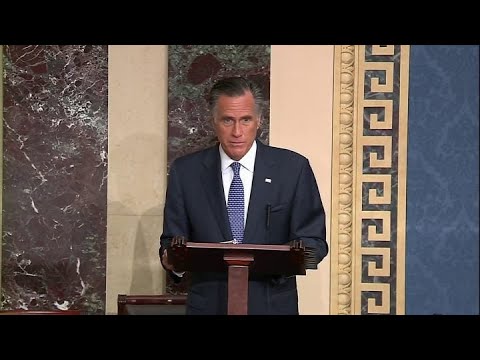 Let's be absolutely clear on this: I am not a Romney fan. I did not, in 2012, vote for Mitt Romney in his presidential bid, nor would I ever vote for Romney for any office, full stop. On issue after issue, I am, and always have been, diametrically opposed to the things Romney stands for.

But on Wednesday morning, as he announced why, on principle, he had to vote to convict an outlaw president who was the leader of his own party, my brother Mitt spoke for me.

I'm also not a huge Nancy Pelosi fan. In interviews, I've heard her flog Democratic talking points, often ignoring whatever question the interviewer just asked her. When Democrats took the House back in 2018, I very much wanted her to step aside and open up the Speaker position to someone younger and less white. Many of her more institutional positions, particularly on economic and military policy, give me pause.

But Tuesday night, tearing up her copy of the State of the Union address on national TV as this same outlaw president, standing right in front of her, received a standing ovation from the same cowardly politicians who would the next afternoon acquit him, my sister Nancy acted for me.

Yesterday I wrote about the priestly role both Romney and Pelosi had played, how the symbolic acts they took with that vote and that action carried far more power than the 78 minutes of pandering, self-satisfied bloviation Trump smirked his way through. That essay hasn't taken off--last time I checked, it had eighteen views--but it did result in a rare comment from one reader, who said he'd have been more impressed if Pelosi hadn't clapped at all during the speech. I, too, wish this Democratic leader was further to the left (see paragraph 3, above), but that wasn't the point of that post--or of this one.

Yesterday morning, at the National Prayer Breakfast, conservative writer Arthur Brooks spoke about their importance of loving one's enemies. During his remarks, he asked for a show of hands of how many in attendance had family members they disagreed with on political issues, yet still loved. Plenty of hands went up. Trump's did not. During his own remarks, Trump joked that he'd be disagreeing with Brooks--and, by extension (though he didn't explicitly say it), with Jesus. How can you love someone who hides behind religion as an excuse to do something wrong, or claims to pray for someone they publicly denounce? This was, of course, a reference to both Romney and Pelosi, as well as an illustration of Trump's imperial narcissism claiming for himself the power to adjudge righteousness based entirely on what serves his own interests. Misguided evangelicals who've jumped on the Trump train have embraced this substitutionist notion that Trump is somehow the political messiah who fulfills their dream for a theocratic America as no politician ever has before, and does it despite his obvious ignorance and incomprehension of religiosity. With the help of his handlers, Trump will use (and frequently mangle) Christian imagery to promote himself; but he has no understanding of the communitarianism that is central to even conservative faiths, or the teachings of compassion and service to others that make institutional religion relevant in any contemporary setting. "Pray for those who persecute you" (Matthew 5:44) is one of Jesus' most powerful teachings. Trump would rather persecute them right back, and he announced his attention to do that at the prayer breakfast. Not to get too deep in the weeds, but Trump has very literally embraced the role of antichrist in the process, a person of power who uses the trappings of religion to accomplish the exact opposite of what its founders intended.

In such times, it's essential that we who would resist such monstrous leadership seek out and strengthen our common goals. This is an essential plank in the broad-based organizing model of activism that formed both Barack Obama and Bernie Sanders. It's present in the Quaker meeting practice of affirming a speaker whose words harmonize with one's own thoughts on a subject, as expressed in the statement "my brother/sister speaks for me." It's conveyed in Nancy Pelosi's frequent insistence that she prays for Donald Trump, and in Mitt Romney's difficult decision to stand against a president whose policies he supports, but whose immoral actions he cannot condone.

During my career in ministry, I had a number of parishioners who disagreed with me vehemently on issues of theology, Biblical interpretation, ethics, politics, and many other topics they and I could be passionate about. I didn't lose my commitment to be their pastor because we disagree, nor did they walk away from the churches I served. Some of them became dear friends. It's not that we simply "agreed to disagree": in some cases, we never stopped trying to convert each other. What we did acknowledge is our mutual humanity, and our belief that disagreement on an issue was a lousy reason to stop caring about another person's wellbeing. And from time to time, one or the other of us would say or do something that resonated with the other. At such times, it was important to express an "amen."

That's the dynamic of representation. Mitt Romney cast a vote that transcended party, as none of his fellow Republican senators felt capable of doing. In so doing, he brought down on himself the wrath of all Trumpdom. Nancy Pelosi performed a symbolic act that no one else could have, and did it at the one moment when it needed most to be performed. No, it didn't change anything that was to happen in the conflagration of gloating and vengeance that began the next day; but doing it the way she did, at the moment she did, was more powerful in its rejection of Trumpism than tens of thousands of protestors in the street.

You don't have to be a politician to represent in this way, though it helps. The Parkland parent who was escorted out of the State of the Union because he was too vocal in his disagreement with Trump's NRA pandering represented well the majority of Americans who want stricter gun laws. The Chinese doctor whose warnings of the corona virus were ignored until it was too late, and who has now succumbed to the virus himself, represented hundreds of millions of Chinese citizens who are dissatisfied with their regime's sluggish, PR-driven response to health crises. No, you don't have to be a national figure, but it helps: to represent, you must be in a position, even if momentarily, to be seen and heard by large numbers of your fellow citizens.

That's why most representation comes from individuals who've been elected to represent, whether it's been with votes, dollars, or hits on social media. It often comes at a price: the Dixie Chicks were in a good place to represent heartland resistance to the Iraq War, but it cost them years' worth of record sales and performance contracts. Mitt Romney is facing a blizzard of reprobation from the political party that has been his home for his entire career. And history books are filled with examples of spiritual and political leaders whose representing led to their martyrdoms.

So thank you, Mitt, Nancy, and all the other representers who will, in the moment, say or do the right thing in behalf of the rest of us. Thank you for speaking for me, for acting for me, for so effectively making the statement I could not. Long may you represent.
Mitt Romney Nancy Pelosi National Prayer Breakfast Representation