There Is No Other Hand 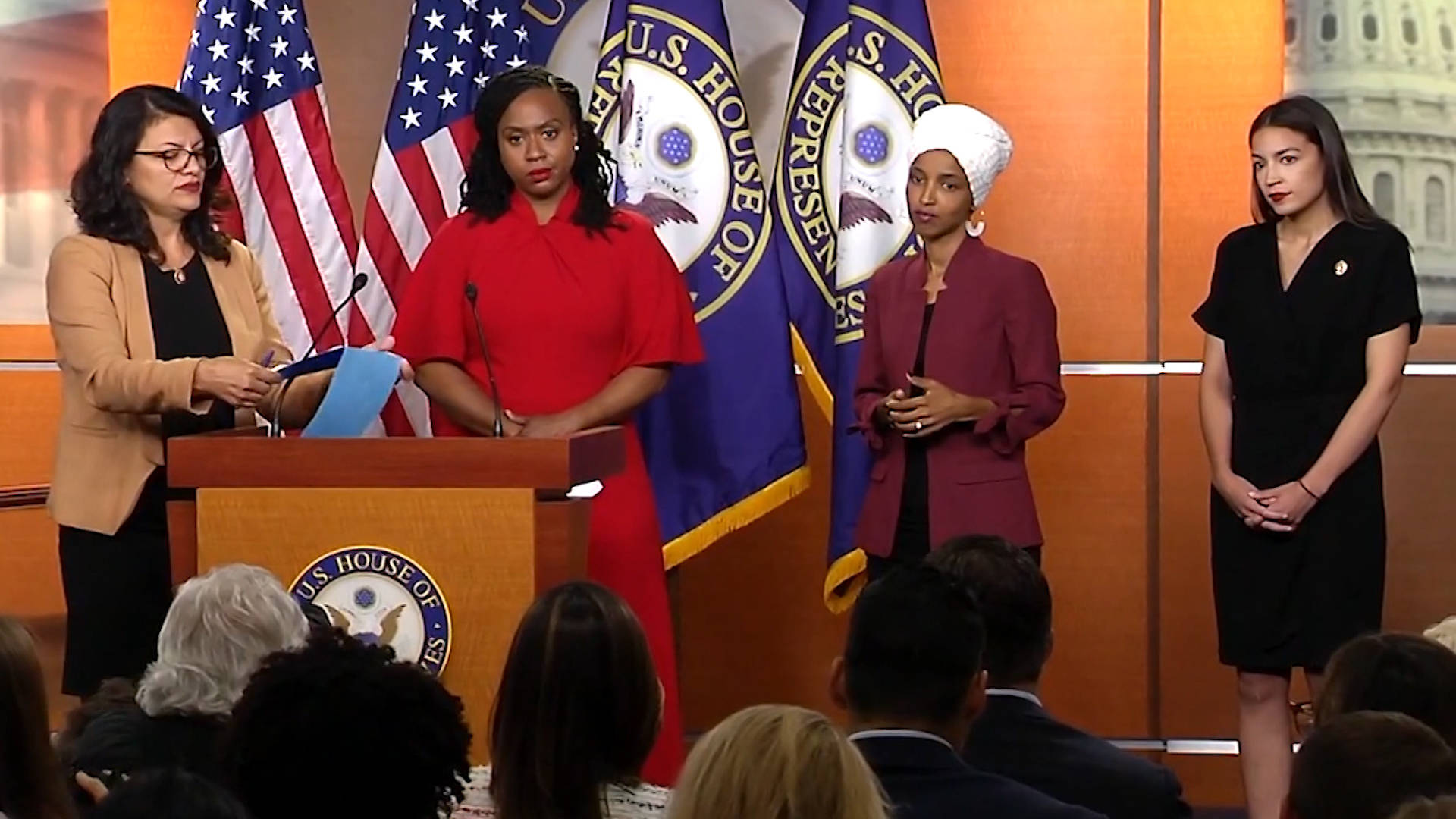 The subjects of Trump's latest assault on American values.

There are so many ways to say "no" to this president.

No, the four congresswomen you attacked are not going to be flown "home" by Nancy Pelosi to get them out of her hair. No, they're not foreigners, aliens, or even immigrants (even though one of them once was), they're citizens. No, the color of their skin does not make them any less American than invasive pink-skinned you. No, the act of criticizing this country is not unpatriotic (in fact, you did plenty of it during your own campaign). No, no, no, no, no.

Since Donald Trump began his campaign with an attack on Mexican-Americans, "no" has been the prevailing message of every thoughtful pundit, regardless of political persuasion. No to the misogyny, the lying, the sabre-rattling, the racism, the rabble-rousing, the bluster, the threats, the incompetence, the corruption, the grifting and graft, the assaults on anything and everything that might even begin to question that nobility of this monstrous wannabe autocrat.

It's everywhere because it's the only rational way to deal with the publicity vampire in the Oval Office. Journalists and columnists who cover politics have had to make themselves into a bulwark against this regime. There can be no point/counterpoint debate with a world view grounded in the bowels rather than the brain. Trying to argue points with Trump or his surrogates is an exercise in futility. The facts don't matter to these people. Worse than that, facts that contradict the demented thumb-written rants of the chief executive are viewed as treasonous, labeled "fake news," and, should they come out of a federal agency, administratively suppressed. It is up to the media to calmly, patiently, and endlessly say "no" to the endless barrage of lies.

I've dipped into the fray from time to time in this space. I don't have much of an audience--lately, it's rare that one of my columns has more than 20 views--and I know I'm preaching to the choir, so when I do write about Trump, it's a therapeutic act. I just have to get it out. Getting it out all the time, though, is tantamount to dysentery: there's only so much waste you can excrete before you find yourself dehydrated, exhausted, and in desperate need of a remedy.

Normally, I am fascinated by politics, and I've frequently wondered if I missed my calling by not majoring in journalism and/or political science. That has not been the case since 2016: I've been writing a lot less because there's no end to the abominations issuing from Washington. Oh, there was plenty to get angry about before Trump seized the spotlight. I was frustrated and furious with how Congress was running out the clock on the Obama administration, and I addressed that. The difference since Trump arrived is that there is not a day when there's too much to write about. I have to give credit to the commentators and reporters who have to cover this shit show, and don't have another career to fall back on. This is an ultra-marathon with really unpleasant scenery, and the finish line is still so far away it's tempting to just drop out.

So why am I writing this today? It's not like I've been avoiding these topics of late. "What's he done now?" is the question I ask whenever I scan the headlines (as I do throughout the day); and frequently, the answer I find in those headlines leads me to groan loudly enough that Amy asks that very question of me. What makes today different from every other day since Trump descended on his gilded escalator to announce his evil scheme to launch an American version of the Cultural Revolution? And the answer is twofold:

First, I am saddened and appalled at how easily a tweetstorm can seize control of the media, and with how granular the response of the media can be. Trump launched his weekend attack not because AOC and her Squad had said anything newly offensive to him, but because their dust up with Nancy Pelosi was pushing him to the margins of the front page. How could he make a quarrel within the Democratic party be about him? By launching a racist, ageist, misogynist attack against the younger women of color who constitute the Squad, an attack that both kept his base riled up and, once again, dragged the media into the fray, repeating over and over the obvious factual contradictions to what he was saying, going on from there to critique the use of some of those talking points, and then digging into a deeper analysis of how this strategy anticipates Trump's likely reelection platform, and whether or not it's brilliant, demented, cynical, or the extent to which it's a combination of those elements...it's exhausting and, in the end, pointless, but what else can they do? I just know I need to get off this merry-go-round, because:

Second, I am realizing today that the best analogy I can make for this regime comes from the realm of theoretical physics. [Disclaimer: I haven't studied physics since high school. Everything I know about this topic I picked up from science fiction stories and popular science articles. And anyway, I'm just using this as an analogy, so lighten up, wonks!] Here's my epiphany: Donald Trump is a singularity, a mass so dense that the laws of physics are distorted by his very existence. At first, he was a small disruption in the time-space continuum of the Republican primary campaign that launched in 2015. Over time, he absorbed more mass and energy as his ego sucked up one rival after another. Politicians of his own party who spoke out against his populist bigotry eventually found themselves swallowed up by him. Few managed to escape his pull, though conservative pundits fared better: some of the best current things being written in opposition to him come from never-Trumpers on the right. By and large, though, he continued to grow until his mass absorbed the Republican party in its entirety. Once he's off the stage, whether it's 2020, 2024, or (heaven help us) much later than that, it will take the party generations to rid itself of his influence and aura--if, that is, the party even survives the deaths of his mostly older core voters.

It gets worse: once the election was over, and Trump had moved into the White House, the singularity continued to grow, becoming now a full-sized black hole from which nothing positive can escape. The media, the Democratic party, NATO, the European Union, allies in every part of the world, all find themselves trapped by the immense pull of this ravenous cosmic drain. Nothing sucked into the hole can escape; the only choice for GOP legislators is to avert their eyes, wring their hands, and try to change the subject when Trump takes yet another, deeper step into behavior that is light years past being beyond the pale. Occasionally, one of them manages to break away, spinning off to become an independent or, in retirement, to finally find a voice.

The danger for the opposition is that there is no defining themselves in any way except being opposed to Trump. Nancy Pelosi and Chuck Schumer have tried to redirect the media to their legislative agenda, which is, of course, pointless: nothing coming out of the Democratic house can pass the Senate, and nothing suggested by a Democratic senator is ever going to see the light of day as long as Mitch McConnell has a say. As much as we hate to admit it, as much as we wish the work of Congress could be governance, we are all locked in the gravitational vortex of Donald Trump. The work of the House has to be saving the United States and, really, the entire world from spiraling down into his voracious maw. That means investigations, impeachment hearings, and, yes, pressing the case to its conclusion, even if, as seems so likely now, the zombie majority in the Senate votes, predictably, to acquit a global criminal who, in any previous generation, would've been forced to resign months ago for offenses far less extreme than he is obviously guilty of.

There is no other hand this argument can land on. There's no running out the clock and letting whatever's left of the country hopefully cast him out on election day, 2020. The divisive racist appeals are only going to intensify. White supremacists will be emboldened, and people of color will increasingly find their safety at risk. Lines of division between urban and rural American will deepen. Whatever the result of this most important election (I know we say that with every general election, but this time it's truer than every), a large portion of the United States will be alienated from the rest of the country. Considering how much damage the Tea Party did in 2010, I don't want to see what apocalyptic depths a large, heavily-armed rural white cohort, angry over an election they will believe was stolen from them, and, after half a decade of believing the lies and distortions of their demonic leader, inclined to believe their opponents are subhuman, could sink to. As for my side of the spectrum, should we find ourselves losing in 2020--however unlikely that may be, but then, 2016 wasn't supposed to happen, either--I could see many of us doing what we threatened to do the first time Trump won, abandoning the dream that was America and becoming expatriates, and/or seceding from the union, perhaps as the coastal nations of Pacifica and Atlantica. Given what I just wrote about Trumpists in defeat, that civil war could wind up being even more bloody than the first one.

That's why we need to take Trump out sooner rather than later. He's already wrought more destruction on the United States than anyone thought possible. He's a chaos agent, and he will only draw the nation deeper into his dumpster fire if he's allowed to stay in power into another election cycle. There's no way past this singularity except to dive deep into it, and destroy it at its center: break it apart, shatter the vortex, put a stop to the racist rants and the Republican justifications that follow. Break his hold on the older rural electorate who believe in him by showing them just what a monster he is. Do it through the testimony of Robert Mueller and every ex-member of the regime who can be found, under whatever rock they retreated to once they were cast out of the White House. Do it by continuing to patiently, firmly insist that the America we believe in is bigger, better, and more beautiful than the petty potentate Trump imagines it to be.

And do it now. I've written too much about this man, and it's not even my job. Push this asshole off the stage, and let the journalists and pundits get back to reporting on things that matter far more than he does.
Labels: bigotry Donald Trump punditry racism Squad
Location: Portland, OR 97229, USA