I'm Not Who You Think I Am Part II: Stony-Faced Grief 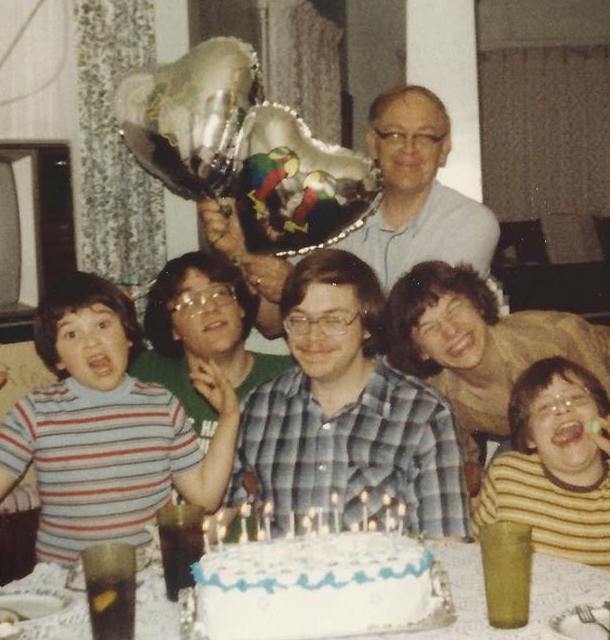 The only one not having a good time at my own party--or am I?

The question was rhetorical. If you guessed I wasn't enjoying myself, you guessed right--but you had an equal chance of guessing wrong. As I've been pointing out in my recents posts, it can be very hard to know what I'm thinking or feeling from the stoic expression on my face. I don't wear my feelings on my sleeve, or anywhere else on my body.

That doesn't make them any less real, though. In fact, in this photo, it's not that I was having a bad time, despite the best efforts of my parents and brothers. (That cake would've been my favorite, angel food with seven-minute frosting, and there's a good chance those candles were the joke candles that were hard to blow out--my parents had a thing for them in the early 1980s.) The truth is--and I remember this very well--that I was grieving a relationship that was never going to be what I wanted it to be. Just a few days before this party, I had fallen in love with a friend, confessed my feelings to her, and had been told we could never be anything but friends. My heart was still broken, and it would be weeks before I completely pulled myself together and accepted this truth.

It wasn't my first experience with heartbreak. Twice in my adolescence, I had the experience of being led to believe a girl had feelings for me, only to learn it had all been a game that culminated in cruel laughter by her and her friends and what a fool I'd been to take the flirting seriously. I'd also experienced unrequited feelings for girls who were far nicer people, and did their best to gently help me face the reality of being friend-zoned. This time, at 21, was one of those, though by far the most painful I'd experienced.

I couldn't really talk to my family about it, either, though I probably did share some of what I was feeling with the brother who was closest to me in age and was, at this time, also a college student. Instead, I turned to other friends when I was back at college (the let-down happened just before spring break, so I had to do most of my processing at home, rather than on campus) to help me understand what I was experiencing, and how to carry on in a world that was not what I'd let myself hope it might be.

It was educational in a lot of ways. Remember who I reacted to the disappointing response to my confession of love, I am embarrassed at the pleading I engaged in. I experienced another disappointment at the same time: I had applied to be a resident assistant, and had not made the cut because, as I was told by the screening committee, they just couldn't imagine people coming to me with their problems. The same face that kept people from realizing I was grieving also kept them from reaching out to me.

That's how it's played out ever since, and I now realize it's one of the reasons I so often felt isolated. I walked around lonely, sad, grieving, and nobody had any idea that's what I was feeling. It's not that people didn't want to reach out and help me; it's that they had no idea I needed them to. There was empathy and compassion all around me, as I discovered whenever I initiated conversations with others about what I was feeling, and it probably would've been spontaneously offered to me had anyone been able to see it in my face.

Oh God. I just had to take a break to deal with what this has meant for me, how many friendship opportunities I missed, how much comfort and support I could've had when I needed it most; and, beyond that, how many people might have asked me for the help I so badly wanted to offer them, had they only known how receptive I would be to a request. Instead, they saw a cipher, an unreadable granite face that neither offered nor invited sharing.

Which is probably why, since the end of my first marriage, all my relationships started with connections made over the phone or through instant messaging prior to a first date--and how many first dates never led to second dates. I might feel I'm completely engaged in a conversation that is mutually satisfying, while the woman across the table from me is left wondering how that stoic face could belong to the guy she spent hours talking to on the phone leading up to this cup of coffee.

But back to the grief: after my second marriage collapsed, I had a lot to grieve. That marriage had been a mistake, a rebound from the first entered into far too hastily, and its decay had paralleled my own growing disenchantment with ministry. It had also been a transition in my life as a single parent, and when it ended, it was hard for me to find my footing with my children and their mother. For all this, I don't believe I was suffering from depression: I found the initiative to train for and run in the Seattle Marathon, to begin dating again, and to dive deep into music composition and arranging, part of my final job as an appointed pastor and, for a few months, a music minister. The church to which I'd been appointed, though, found my sadness-tinged flatness hard to deal with, and after six months, I was encouraged to walk away from the church and go on disability--for depression.

I remained on disability for three years, receiving counseling and, when my income was cut, moving into the Peace House. It was a fallow time of spiritual and professional exploration. A year and a half into it, I made an attempt to return to active ministry, believing in the wake of the 9-11 attacks that I had something to contribute. I was rebuffed, though the psychological evaluation did not come back with a result of depression--in fact, the clinician didn't know what to make of me, and in retrospect I believe she was trying, and failing, to get a grasp on my identity as a high-functioning adult with an autism spectrum disorder. Even if I couldn't be a pastor (and, being honest with myself, didn't really want to be one), I couldn't stay on disability without a diagnosable condition. So I reactivated my teaching lesson, spent a year subbing, and eventually stumbled into what I should've been doing all along: teaching music to elementary-age children.

Even in the right profession, there's been plenty to grieve along the way: a series of broken relationships, separation from my children, transitions from school to school as I struggled to find stability in a world that undervalues and underfunds the profession I'm called to, and conflicts with administrators who didn't understand my flat affect and let it influence their evaluations of me.

That brings me to the present: for nearly a year now, I've been grieving a loss my intuition predicted long before anyone admitted it was going to happen, the collapse of my current teaching assignment. Through it all, I've kept myself professional with my students, doing some of the best teaching of my career as the end of the year draws near. I'm holding back the sadness I feel for the many students I will soon be saying goodbye to for the last time, focusing on the joy of the moments I still have with them. And I'm doing my best to check the anger I feel about the situation, knowing expression of it could make matters worse for me as I look for a new position.

Through it all, I'm aware for perhaps the first time that people really cannot tell that I'm grieving unless I share that information with them. I've had many expressions of support on Facebook, where I've posted several times (without details) about what's going on for me professionally. Friends who've read about it and see me in person ask how I'm handling it, making it possible for me to share much that my face does not convey.

Here again, as in so many other avenues of my life, I'm finding I need to be intentional in sharing what I'm feeling, talking about what I'm going through. It's hard working for this 58-year-old dog learning new tricks. It's got to be hard, too, for people who've known me for years to understand things that I'm just starting to figure out myself. The grief of this job ending--after I'd hoped it would be the last job I had before retirement--is minor next to the grief of realizing how much my stoic face has kept me from enjoying life as passionately as I've wanted to, and worst of all, kept the people I love from knowing how much I care about them. There's a lot for me to mourn.

I'm likely to do most of it behind the mask I was born with. I'm hoping, though, that thanks to the revelations I'm having about myself, and sharing with others through this medium, that I can begin, too, to talk about what I really feel with friends who never knew how deep this still waters run.
Labels: Autism Spectrum Disorder grief
Location: Portland, OR 97229, USA