Nothing up my trunk...

The most conservative thing about today's Republican party is the dirty tricks it's employing to extend its white, male, moneyed gerontocracy well into the future.

New York Times columnist Jamelle Bouie summarizes this electoral abomination beautifully in an op-ed published yesterday. The GOP strategy is so complex, so wide-ranging, so long-term that the 21-movie Marvel Cinematic Universe saga that just concluded in Avengers: End Game pales by comparison. Reading the signs of the times that foretell the inevitable transformation of the United States to a truly multi-cultural melting pot in the next few decades, Republicans began their work of electoral nullification with the 2000 Presidential election, as they used protests and Supreme Court packing to stymy a full and fair Florida recount that would likely have handed the race to Al Gore. As Bouie points out, in the last seven Presidential elections, only one Republican has achieved a popular majority--George W. Bush in 2004--and even then, it was narrow. As more and more of the children of immigrants reach voting age, and as even young Republicans grow disenchanted with old-school conservatism, it is only a matter of time until the party finds itself locked out of the White House, just as has happened to statewide races the entire length of the West Coast.

To forestall, dilute, and disempower this trend, the Republican party has taken the lessons it learned in 2000 and applied them across the country. Pro-democracy initiatives like early voting, vote-by-mail, and turning election days into holidays are opposed at every level. Voter ID laws, closed polling places, and other policies designed to make voting less convenient, more difficult, even impossible for poor, previously incarcerated, and minority citizens are pushed through by Republican secretaries of state and legislatures. When a statehouse or governor's office turns Democrat, the lame duck Republican state legislature scrambles to pass last-minute laws stripping the governor of power.

In Washington, Mitch McConnell's two-faced leadership blocked President Obama from accomplishing any of his policy goals legislatively, and kept him from even nominating a Supreme Court replacement for Anthony Scalia. McConnell has also rushed through hard-line conservative appointments to the judiciary across the country, effectively installing generational brakes on the Democratic resurgence now building.

Finally, Democrats will always be at a fund-raising disadvantage thanks to the preference of monied interests for Republican tax policies.

All these factors contribute to the Republican party's cynical and thus far successful campaign to reverse the evolution of the United States into a democracy far more representative of its actual population. Throughout the twentieth century and on into the first years of the Obama administration, the country set aside more and more of its racist, sexist, homophobic ways, choosing instead to empower citizens who had previously been marginalized and ignored. It became possible for persons of color, women, and sexual minorities to campaign for and, in many cases, achieve higher office, finally beginning to break the hold of older white men on all American levers of power.

While many, particularly the young, eagerly embraced this movement toward true democracy, white men of my generation and older found it frightening. Most of the gains have been made in my lifetime. Here's Lyndon Johnson's Cabinet: I count 39 men in this photo, all of them white. There are no women, and you can be certain there are no openly gay men. 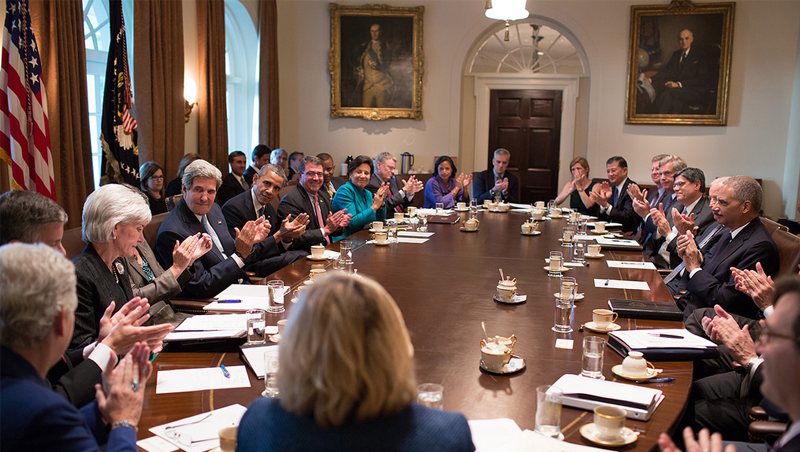 I'm not going to do a statistical breakdown of the 29 people in this picture, but it's immediately clear that there are both persons of color and women well-represented in it. It's still majority white, majority male, but there has definitely been an evolution from the monoculture of the Johnson administration.

Republicans might argue that there are a few women and persons of color in Donald Trump's Cabinet, and that is certainly true. That Cabinet has been in a high state of flux, with frequent resignations and many offices currently filled by acting secretaries. Millionaires and billionaires are over-represented, as well, and Trump's picks for judicial seats are overwhelmingly white and male.

In this reconsolidation of white, male power, Trump's GOP has, in response to its frightened white male base, sought to reverse a generations-long trend toward real democracy. In so doing, they have revealed themselves to be, ironically, the most conservative governing class in the history of the United States of America.

The founders of this country were revolutionaries who sought to break the yoke of dynastic rulers. The global tide was already turning: Great Britain was already a parliamentary democracy with a figurehead king, and France was on the verge of slaughtering its own ruling class in favor of a far more radical democracy than the founders envisioned. The genius of American democracy was in the Constitutional separation of powers into three co-equal branches, coupled with regular elections to put a check on incompetence and power-mongering.

In the beginning, those elections were limited to a small minority of American citizens: landed white men. In addition, there were additional limitations on how direct their vote could be: state legislatures, the national House of Representatives, and the electoral college were elected by voters, but Senators and the President were chosen by elected politicians.

Almost immediately, these buffers against full democracy began to come down. The electoral college quickly became a system for rubber-stamping the decision of the voters, though its formulation has resulted more than once in handing the Presidency to a candidate who lost the popular vote. Senators came to be directly elected, and the voter base was expanded to all white male citizens, then all male citizens, then all citizens. Every expansion of the voter base led to reactions that sought to reverse the electoral power of now-included minorities, most effectively with the Jim Crow laws that locked African-Americans out of their Constitutional rights for nearly a century. Overall, though, the trend of American democracy has always been toward expansion of the voter base, and it has been reflected in the gradual diversification of power.

That progressive trend has now come up against a wall of bigotry and power lust that seeks not just to hang on to what power remains, but to reverse hundreds of years of democratization, returning political power to a narrow, monied minority of white male Americans. To the current Republican base, making American great again means restoring the power dynamic of the 1780s.

As deft as Republicans have proven at crafting a long-range strategy for clinging to power, they're remarkably short-sighted at its implications for the nation and the planet. Their stubborn refusal to acknowledge the existence of and, more importantly, create policies that address climate change doom their own grandchildren to an existence that will be far poorer and lethal than they themselves have ever known. Their efforts at blocking non-white Americans from voting guarantee that, when those citizens finally do make it to a polling place, they won't be choosing Republicans. This is going to drive the party ever closer to the siren call of fascism: if they can't hold power legitimately (and it could be argued that, with their willingness to trash Senate rules, to spend corporate donations profligately, and their efforts at voter nullification, the legitimacy of their current power is questionable at best), they may be willing to, as Trump threatened to do in 2016, ignore the results of elections and turn their more rabid and well-armed followers into partisan stormtroopers.

I'd rather believe that won't happen, that when faced with genuine electoral loss, Republicans will finally go gently into that dark night. In his candidacy announcement, Joe Biden called on Americans to treat the Trump regime as an aberration, and to use the 2020 election as an opportunity to restore the trend toward democratization. I hope it's not too late for this: that the voters will turn out in numbers that render moot Republican cynicism, and that those they elect will use their power to turn back all the nullification efforts that have worked against true democracy. Since 2016, though, I know better than to put too much hope on elections. America has let me down before, and it won't surprise me if it does again.
cheating gerontocracy GOP minority rule Republicans voter suppression
Location: Portland, OR 97229, USA