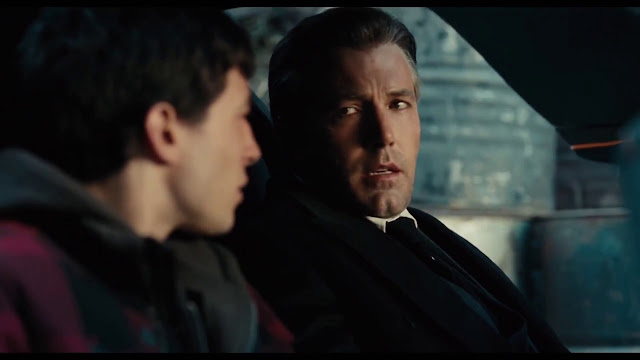 "What are your superpowers again?"
"I'm rich."

And that, my friends, is why we have an idiot in the White House insisting that he is "like, smart" on Twitter.

Soon after Bruce (Batman) Wayne has recruited Barry (Flash) Allen, Barry, in the context of a conversation about the dream team of superbeings Bruce is assembling to combat a really dumb cosmic villain named after a one-hit wonder band of the 1960s (Steppenwolf) who is, again, a knock off of the uninteresting cosmic villain who will be the centerpiece of the next Avengers movie, asks him what superpowers entitle him to be part of this team. Bruce's two word answer--"I'm rich"--is maddening to anyone who's spent any time at all in the shadowy Gotham side of the DC universe. Yes, Bruce Wayne has a lot of cool toys that enable him to zip up the sides of high rises, glide across the skyline, encase himself in lightweight body armor, and roar through the city in a turbocharged tank. But all of those gadgets would be worthless without the years of training he's devoted to sharpening his skills as a martial artist and gymnast, not to mention the deductive intellect he puts to use as the World's Greatest Detective. Take away all the gadgets, even strip him of his body armor, just give him a black cape and a cowl, and Bruce Wayne is still a superhero. Riches do not the Batman make.

They did, however, make a President. We who care about the future of American democracy have long railed against the Supreme Court's Citizens United decision, which equated corporate money with free speech--though in a number of elections, it appeared that advertising blitzes actually worked against the success of the candidate being promoted. Trump's victory erases those losses, and jolts us back to the equation of money with electoral success.

I'm not saying that Trump bought the election--or that he could even have afforded to. Part of the collusion scandal that surrounds Trump is the extent to which he is indebted to foreign interests, including Russian oligarchs. His taxes have been withheld to protect the lie of his status as a billionaire. His campaign depended to a large extent on funding by the ultra-right, nationalism-friendly Mercer family. So no, it's not that Trump is, statistically, all that rich. It's that he, more than any other member of the million-to-billionaire class, embodies wealth. He moves in a cloud of money, gilding his homes and hotels, descending to announce his candidacy on a gilded escalator, angrily tweeting from a gold toilet, posing with his family in a gilded chair resembling a throne. His actual bottom line is just not that important: the world treats him with respect not because he is rich, but because he acts rich. Challenge the veracity of his claim to wealth, and he sues. Whether or not he has as much money as he claims, he's got enough to drive his accusers into bankruptcy with lawyer fees and court costs.

This brings me to the other reason I've emerged from my teaching-diminished blog output: three days ago, excerpts of an expose of the Trump Regime revealed that without exception, every Trump advisor interviewed for the book considers the man to be an idiot. Those who make public declarations of admiration for him--Vice President Pence, his Cabinet secretaries, and most embarrassingly of all, Senate and House leaders--are sucking up, knowing that lavishing the man with undeserved praise is the only way to get him to cooperate. None of these toadies believes a word of this vapid praise. Trump doesn't read, lacks the attention span to sit through even a short briefing, spends his days watching sycophantic Fox News, lacks the mental capacity to understand what any of his appointees actually has the power to do, and engages in pissing contests with nuclear-armed dictators. Nobody in Washington who knows the first thing about government sincerely believes he's up to the job, and they will admit to it the moment he's out of earshot, slapping their foreheads in disbelief at his incompetence and referring to him as an idiot.

Idiot though he is, the man is still rich, and he did manage to get himself installed as President. In his mind, that makes him smart; no, strike that, it makes him a genius. In his mind, the multiple investigations into Russian manipulation of the election are bogus because they endanger his sense of having won the election on his own merits. His wealth, his fame, his political success prove he's smart.

In fact, though, we have a President who, despite the wealth that got him elected, lacks any other superpower. He has none of the discipline, intellect, or commitment to justice that turned Bruce Wayne into the Batman. Strip Trump of his gilded lifestyle, and he's just a demented racist senior citizen venting on Twitter.

Which brings me, finally, back to "Justice League" and the wrongness of that throwaway line about wealth as a superpower. There were times in the Batman universe when one or another of his nemeses--the Joker, the Penguin, the Riddler--got access to some or all of Batman's gadgets, went on a joyride in the Batmobile, and proved that it actually takes skill to use those toys. Put on the Batsuit in its modern, armored version, and you could probably survive a beating, maybe even a few gunshots--but that doesn't mean you could climb the side of a sky scraper, hold your own in a melee, or steer a rocket-powered tank around Gotham City. Those villains were all super in their own ways, gifted in manipulating minions, cracking safes, creating dastardly gadgets of their own, but none of them could hold a candle to Bruce Wayne in using the tools of his trade.

That's what we have in Washington now: the White House, the center of our superpower nation, is no longer inhabited by a human being with the talents and skills to use it properly. A villain whose only power is wealth is behind the wheel of the Batmobile, careening around the city, destroying landmarks and treasures in his hopeless quest to be taken seriously.

At the end of "Justice League," the considerable powers of Batman, Aquaman, Wonder Woman, Cyborg, and the Flash are still inadequate to defeat Steppenwolf. It takes the intervention of a resurrected Superman to bring him down.

There are heroes all over America opposing the Trump phenomenon: the millions who turned out for the Women's March, the lawyers and judges who keep rejecting his executive overreach, the masses whose phone calls saved the Affordable Care Act, the Black voters who chose Doug Jones over Roy Moore for the Virginia Senate seat. The initial premise of "Justice League" is correct: no one superbeing can bring down a monster like Donald Trump. It will take a communal effort. We as a nation must reject the most insidious falsehood of this regime: that wealth does not, in and of itself, prove that anyone is good, wise, intelligent, competent, just, or deserving of any distinction save placement on a list of people with money. We must do it with our voices, our hearts, our bodies, and our votes for someone who will make us proud to say "That's my President."
Batman Donald Trump Justice League superpowers wealth
Location: Portland, OR 97229, USA