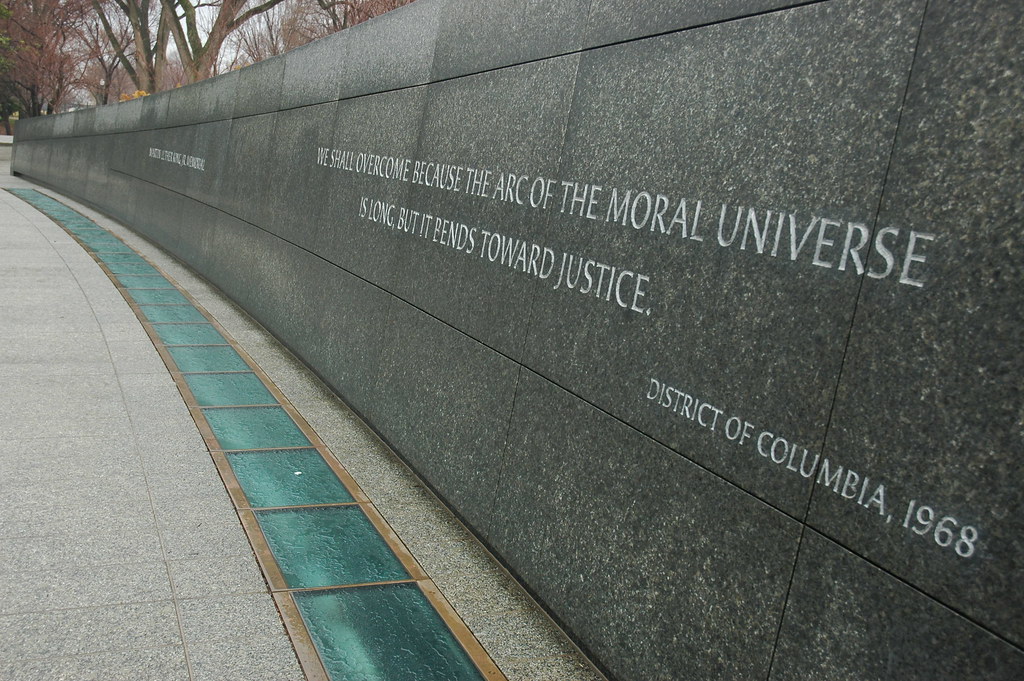 Look at the facts of the world. You see a continual and progressive triumph of the right. I do not pretend to understand the moral universe, the arc is a long one, my eye reaches but little ways. I cannot calculate the curve and complete the figure by the experience of sight; I can divine it by conscience. But from what I see I am sure it bends towards justice.

Things refuse to be mismanaged long. Jefferson trembled when he thought of slavery and remembered that God is just. Ere long all America will tremble.

These words come from a sermon by Theodore Parker, a Unitarian Minister, Transcendentalist, and Abolitionist. They first saw print in a collection of sermons published in 1853, and, quoted by essayists, preachers, and politicians, were ultimately boiled down to this aphorism: "The arc of the moral universe is long, but it bends toward justice." In that form, the quote found its way into the sermons of many a preacher of the social justice era, culminating in Martin Luther King, Jr. There is also an echo of it in these words of Mahatma Gandhi:

When I despair, I remember that all through history the way of truth and love have always won. There have been tyrants and murderers, and for a time, they can seem invincible, but in the end, they always fall. Think of it--always.

I've been clinging to these thoughts since 2010, the year the brief hope of the Obama election was shattered by the populist movement known as the Tea Party. At its roots, the Tea Party was a reactionary tantrum over the election of this country's first non-white President, coupled with a misperception of how the Great Recession had been precipitated (in a nutshell, not by federal deficits, but by greedy capitalists). The movement was cynically manipulated by the same wealthy elites who had caused the economic collapse in the first place to dilute and over-complicate the two great progressive policies of the Obama administration's first term: the economic stimulus and the Affordable Care Act. Both these policies, once enacted, improved the lives of millions of Americans who had been victimized by the Recession, not to mention by generations of abuse and neglect from the health care industry. Many of their beneficiaries were the same Tea Party protesters who most vehemently opposed them, who went on to, over the course of the next three elections, remove from office the moderate, pragmatic Democratic legislators who'd limited the scope of the programs. Increasingly empowered by these victories, the leaders of the Republican party doubled down on their opposition to anything that originated in the Oval Office, forcing President Obama to impose policies by executive orders that could be all too easily reversed by his successor.

So now we have a President who cannot open his mouth, or apply his thumbs to his phone, without alienating allies, inflaming the most deplorably know-nothing core of his base, and endangering lives; a Supreme Court the majority of which was stolen by Republican delay tactics; a Cabinet of secretaries whose first priority is dismantling the agencies they head up; a Congress that, almost halfway through its biennial session, has yet to pass a significant piece of legislation (whether the fundamentally flawed and abysmally unpopular tax "reform" can survive the reconciliation process remains to be seen); white supremacy groups marching in the streets of university towns; national monuments and wilderness areas opened up to fossil fuel exploitation; nuclear sabre-rattling; a frantically overheated economy that could, at the drop of a Presidential hat, sink into a worse downturn than the one that gave birth to the Tea Party--it's a list that could go on and on. Every day brings new horrors, signs of apocalyptic times that could spell the end of the American experiment, the collapse of the Republic into an authoritarian nightmare, and the ultimate dissolution of the United States, not to mention the post-war international community.

It's very hard, in times such as these, to feel hope, to feel that the arc of the universe bends any way except toward chaos.

And yet, in the last month, I am finding hope in some of the very unraveling that is adding to my despair. I've written recently of my sadness at the fall from grace of a number of political and cultural liberal icons, all of them either being ejected from their positions of power or stepping down in the face of multiple accusations of sexual misconduct. This has been especially galling when compared to the apparent ability of conservative politicians to brush off similar accusations, and of the willingness of their most ardent supporters to overlook their depravity. Seeing so many fall--including a number of the most potent voices for progress--I cannot help but grieve, not just at my disappointment in these formerly great men, but in what their collapse means to the cause of progress.

Except--and here's the key point--the downfall of progressive sex abusers is, itself, a sign of progress. It's an ancient piece of wisdom that one cannot remove the mote from another's eye without first extracting the log from one's own; or, as I'm reminded by flight attendants every time I board an airplane, to, in the event of cabin depressurization, put on my own oxygen mask before helping a seatmate. Blinded by my own failings, I have no right to pick at the flaws of an opponent. Unconscious, I can't lift a finger to save the stranger, friend, or loved one beside me.

The tide of sexual abuse has finally turned. Whether it will sweep away the racist pederast seeking an Alabama Senate seat or his buddy, the demented huckster in the Oval Office, remains to be seen; but in the light of what continues to happen in the upper echelons of every sphere of American society, as previously unassailable executives, entertainers, politicians, artists, and more are brought down for behavior that just a few years ago was laughed off and ignored by everyone except its victims, I find hope shining through my tears. This is not the evidence I sought of the truth proclaimed by Parker, Gandhi, and King, but it is evidence nonetheless. And if we can bring down the sexists and molesters, who is to say we cannot do the same with the racists, homophobes, autocrats, oligarchs, and theocrats clinging to power in Washington?

I am hopeful that justice will continue to prevail, one besieged status at a time. I do see the arc bending in the way it must. I see the signs that the tyrants will fall, as they always do. At the same time, though, I tremble; for, as Theodore Parker observed in the second half of the quote--the part not carried over into its more succinct, King- and Obama-embraced version--"Things refuse to be mismanaged long. Jefferson trembled when he thought of slavery and remembered that God is just. Ere long all America will tremble." Reading the signs of the times, Parker knew there was a reckoning coming for a young nation that had chosen to postpone the dismantling of slavery. Eight years later, the Civil War began; and, as Charlottesville, the ascension of Roy Moore, and the Presidency of Donald Trump indicate, the wounds laid bare by that conflict are far from healing.

Reading the signs of these times, I find myself feeling very much like Theodore Parker in 1853: the mismanagement of things is accelerating, putting it on a collision course with justice. All the efforts of the Trump movement will ultimately prove futile. Women will step up to claim their share of power, and probably, in the vacuum left by so many men being driven from office, a bit more than their share. At the same time, the shrinking straight white plurality will find its clingy fingers pried away from the levers of power. There will be no more denying that this is a diverse nation, and thought it ought to be governed by diverse leaders. The only question is whether we will arrive at this future civilly, as perpetrators voluntarily step down or are voted out of office, or the hard, bloody way that should cause us all to tremble.