My Pet Demon, Part One 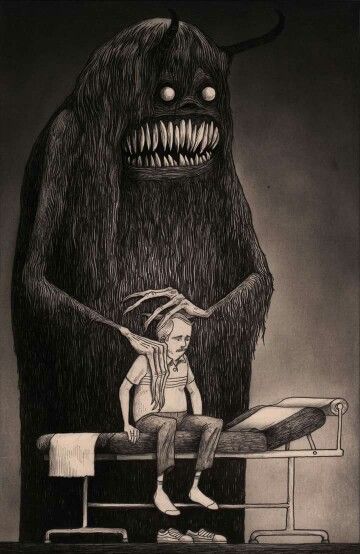 The longest relationship I ever had was with depression.

It started in my teens. I was not, for the most part, a melancholy child, though three years of middle school torment probably contributed to the darkness that set in around the time I turned fifteen. Moving from Idaho to Oregon had felt like an escape, and I loved high school. But one day, after walking home, I found myself rushing up to my bedroom, locking the door, throwing myself on my bed, and sobbing into my pillow. I didn't know where it was coming from: I was nowhere near as lonely as I'd been in middle school, I was receiving plenty of praise from my teachers, and I was already established in the leadership of my new Scout troop. Still, something inside me was not right, and the only way I could deal with it was to muffle my sobs behind a locked door, hoping no one in my family would find out how much psychic pain I was in.

The crying jags would hit me from time to time throughout my high school years. College, on the other hand, was a golden time for me: by the end of my freshman year, I had become part of a circle of friends who were as close and supportive as any non-romantic relationships I've had since. That sense of belonging seems to have chased my depression into hiding. As graduation approached, I found myself dreading my ejection into the real adult world, where I would no longer have my friends to lift my spirits.

And sure enough, within a few weeks of moving into a single room in the graduate dorm at the University of Illinois, I found myself with a roommate: depression was back. The aching empty feeling was now more specific, questioning whether I was in the right degree program and how good a musician I really was, reminding me that I was 22 years old and had never been on a date. It didn't affect my studies or my work, but there were still plenty of alone times when it haunted me. I don't recall any pillow-crying, but I do remember availing myself of the campus minister's listening ear on at least a couple of occasions.

In the year that followed, I was too busy building a life for myself to have much time for my demon--a life that fell apart after just weeks, as I lost my first teaching job. Still, I found plenty of support in the church and music communities of LaGrande. Once the money ran out, and I had resettled to an apartment in Salem, where I subbed for the rest of the school year, I again built up a fine support network at the church I'd attended throughout college. It was that support that inspired me to pursue ministry, so that just fifteen months after receiving a masters degree in music education, I was driving down to Dallas to begin studying for my second career at Perkins School of Theology.

Seminary training is, for all its academic components, primarily concerned with spiritual formation. For that to happen, everything the student brings to seminary--background, history, preferences, presuppositions--has to be broken down, then reformed into something both humbler and wiser. I arrived already in an insecure place: I had rashly abandoned my first career before it had really started, at the age of 24 had still not had a romantic relationship, and for all of my grand talk of having been called to ministry, was in deep denial about the sneaking realization that I was really there to extend my higher education for a few more years before, again, facing the scary real adult world. Add to that the insecurity that came of never having studied any of the humanities in college (a music education major is more like a cross between conservatory and highly specialized professional training, with very little room for liberal arts exploration), not to mention being abruptly immersed in a big, loud, diverse city for the first time in my life, and I was a nervous breakdown waiting to happen.

And happen it did: over the course of my first semester, I sank deep into darkness. For the first time, I began to think of depression as a demon, as I was plagued with thoughts of worthlessness, blamed myself for my loneliness, and filled pages of my journal with questions about what was wrong with me. I don't know what would've happened to me had I not been guided by an advisor to the campus counseling center where, for the first time in my life, I received regular therapy sessions in both an individual and a group setting.

I also fell in love.

There is no antidepressant in the world like the early stages of a relationship. It would be many years before I understood this is true of all relationships: the endorphins of the early stages are wonderful at exorcising depression demons. But this was my first time, and because of that, I was incapable of realizing this first experience was not unique. Three months in, I began to worry that it could not last unless I locked it in, and proposed. My girlfriend, herself a novice at romance, couldn't think of anything to say, and kissed me instead, which I took to be assent.

So were married. As long as we were in school together, the demon kept its distance. But then came internship, a year of working as student pastors in rural Illinois, and there the demon found an opening it could've driven a truck through.

My father was a pastor. I grew up in parsonages. And yet, my memories of church life are not as happy as one might expect of a preacher's kid following in his father's footsteps. Much that I had set aside or forgotten came rushing back during that year of internship, and I found myself deeply in the pit, leaning on my young wife far more than she could handle.

Things got better over the course of the year, enough so that we decided to extend the experience by enrolling in an overseas student pastorate in England. That became a two-year stint that was to remain the highlight of my career. The demon came back a few times in England, but for the most part, I was too thrilled by the adventure of being there--and old enough now to be more cocky than insecure--to feel dominated by it.

Not so once we came back for a final year in Dallas, where the experiences of living next door to a dysfunctional family (yelling and screaming frequently came through the thin wall we shared), spending every free hour working at menial jobs, and becoming a pacifist minority of one drowning in a sea of militant Republicans as the Persian Gulf War came and went pushed me toward the brink. After graduation, we had nearly two months of homeless sojourning before finally moving into our first American parsonage. And then it really hit the fan.

Rather than go into all the horrendous details of a string of hard luck that would make St. Francis feel like God had it in for him, I'll just say the demon found an opening, and exploited it with glee. By November, I was deeply depressed, to the extent that my wife was so frightened by my appearance one afternoon that she called the counselor I had just started seeing to set me up for an emergency session and ordered me to go to it. I remember being in tears the moment I sat down in his office.

The year was 1991. While I would experience glimmers of recovery, it would be two years before I really started to climb up out of depression, and many more before I would tame the feral demon that had hollowed out a lair in my soul.
depression
Location: Portland, OR 97229, USA