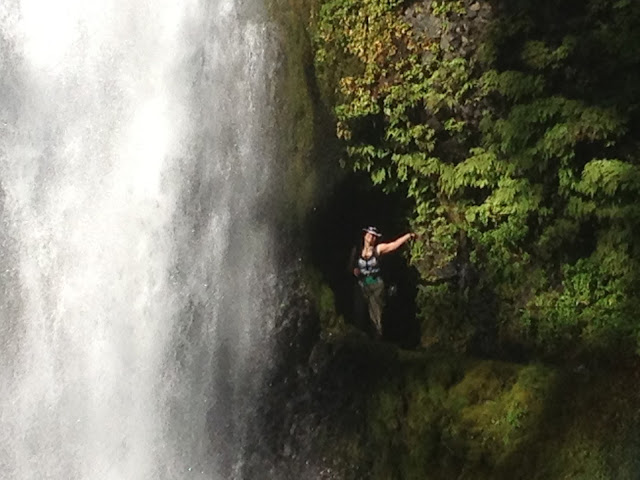 Looking through folder after folder of photos, trying to find just the right one to begin this essay, one thing lept out at me: if it weren't for hiking in the Columbia River Gorge, Amy and I might not be a couple.

Before we met, Amy had never been much of an outdoorswoman, but she'd always wanted to give it a try. I, on the other hand, had always aspired to outdoor feats, but had never had a fitting partner for my adventures. Almost all my hikes were solitary affairs, including one 18-mile one-day trek through the Sawtooth Wilderness in August, 2007, that could easily have been the end of me. That one began as an out-and-back, then turned, on a whim, into a loop that was far longer and more grueling than I imagined. I'd started too late, and at that altitude, it was really more than I could handle, but once I was invested in it, I really had no choice: all I had was a light windbreaker and a couple of Cliff bars. It was well after dark by the time I stumbled out of the woods, splashed into the frigid waters of Pettit Lake to rinse off some of the trail grime, then drove off in search of a campsite. Finally finding one, I curled up in my sleeping bag under the stars--then woke, shuddering, at sunrise, frost everywhere.

The pride I'd felt in my achievement evaporated. What if, when I was up there in the wilderness, my fatigued feet had tripped on a root, and I'd sprained or, worse, broken my ankle? What if I'd missed the fork in the trail that took me back to the parking lot? Could I have survived the night with just my windbreaker to cover me? I hadn't passed any other hikers during the second half of the loop. How long would it have been before someone came by to offer help? I hadn't even bothered to tell anyone where I was going. My recklessness could have cost me my life.

I'd never been with anyone who so embraced my love of the outdoors as Amy did. All through our first spring, summer, and fall together, we hiked. The Gorge was close by, no trail more than an hour's drive from my Portland apartment. Exploring together, sweating together, bagging peaks together, we crafted our relationship on the trail. We hiked other trails, of course, traveling up into the Coast Range, downstate to the Cascades, and, much closer to home, Forest Park. In 2010, we accomplished two signature hikes that are among my proudest achievements as an outdoor athlete: covering Forest Park's Wildwood Trail in its entirety in a single day; and summiting the South Sister.

Over the years, we found ourselves hiking less. Some of it was time: after two years of mostly freelance work, I was called back to Banks as a halftime band director. Two years later, following our summer of backpacking, I found fulltime work in Reynolds. More work meant less time to hike. There was another factor holding us back: Amy's knees, always problematic, could no longer handle sustained climbs and descents. These days, what walking we do is in the greenspace by our house.

Amy will be getting knee surgery this fall, and we have high hopes of being able to return to the trail, though it's unlikely we'll scale the same heights we did when first we laced up our boots. We have marvelous memories, of course, and hundreds of pictures documenting those memories. In those pictures, one or the other of us is smiling broadly, alive with the thrill of self-propulsion through a beautiful place, fully in the moment of discovery.

The occasion for this memoir of a marriage built on the trail is the Eagle Creek Fire. Sunday afternoon, as we drove home from visiting our first grandchild in Boise, we passed through the smoke of that fire. Within hours of arriving in Portland, I-84 was closed. The fire, triggered by the reckless behavior of a group of teenagers tossing fireworks into a stunningly lovely canyon, has raged for nearly a week now. It is burning up the heart of the Gorge, a place of lush forest, plentiful waterfalls, and majestic promontories. This National Scenic Area is laced with so many trails that, over the course of the dozens of hikes we took, we often felt like we had the trail to ourselves. There's no telling how many of those trails will be permanently closed by the fire, how many iconic views rendered inaccessible, how much greenery transformed to charcoal and ash. I'm grieving for the mystical place that formed the relationship it took me almost half a century to find, the place where we first declared our intention to spend the rest of our lives together, calling ourselves "mountain married" on a hike in 2012.

I wonder what will be left when the flames finally cool. Will Angel's Rest still beckon, the first landmark after Crown Point? Will the climb to the top of Multnomah Falls be closed? How about the extension all the way up to Larch Mountain? And what of Oneonta Gorge, Triple Falls, Horsetail Fails, Bridal Veil? What of Peter's Throne? And what will the view be like from across the river in Washington? Will the Oregon side be transformed from deep green to ashen gray?

I've seen the articles reminding me that fire is a natural part of every forest's life cycle, and remembering that the signs of previous cataclysms are readily visible on many of my favorite trails: the boulder fields that issued from prehistoric eruptions, and the far more recent burnt forest at Cooper Spur. I remember, too, the great Yellowstone Fire of 1985, and, coming back there to camp in 1993, feeling such awe at how quickly the forest seemed to be recovering. The heart of the Gorge will be green again in my lifetime, though it will be generations before the trees again reach their old growth height. And once the trails reopen, chances are good that the views will actually be much better: many of them had become overgrown in recent years, so that frequently we were blessed with just glimpses of the river far below.

The forest was living on marked time: climate change has been gifting us with drier, hotter summers which, while more conducive to an extended hiking season, brought with them increasingly hazardous conditions. It was just a matter of time until some inadequately doused campfire, carelessly dropped cigarette butt, or rare lightning strike touched off a conflagration. That's small comfort against the enormous sense of loss I'm feeling. Knowing it had to happen does not lessen my grief. I grieved when my father died, even though he was 88 years old and had suffered poor health for almost a decade by the time of his passing. I will grieve when my mother dies. Should I outlive Amy, I will grieve for her, however advanced in years we may be when she passes. That death comes to everyone and everything does nothing to ease the pain of loss.

I grieve, too, for the young people who started this fire. They did something reckless and ill-advised--though if I'm being honest with myself, I must acknowledge that my gonzo Sawtooth hike was a far more reckless endeavor. They didn't think what might happen as they tossed fireworks into a canyon. I didn't stop to think how dangerous it might be to turn a day hike into a trail marathon. I was lucky: my recklessness didn't end my life, and bring grief to my loved ones. These kids were less lucky: their stunt has destroyed a landscape that is precious to countless outdoor recreators. It's probably precious to them, as well. And now they'll have to live with the knowledge of what came of their momentary thoughtlessness.

I know there are people who want these kids to be punished for what they did, for them to serve jail time, have criminal records, be branded with a scarlet A (for Arson), and always be known as the jerks who torched the gorge. But they know what they did. I don't know what kind of remorse they're feeling, but recalling how mortified I was by the mistakes I made as an adolescent, I expect it will be the end of any innocence they might still have possessed, and will haunt them for the remainder of their lives.