Too Much Is Never Enough 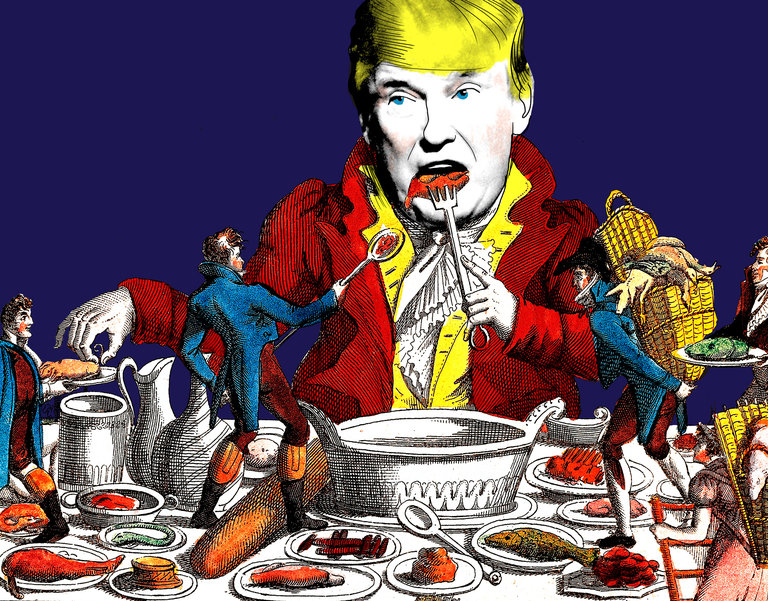 Forget the title: this one's about how too much Trump is killing my muse.

I've certainly written plenty about the insatiable maw who is our embarrassment-in-chief. Of all the topics I've covered since 2013, when Midlife Meditation came into being, none has consumed me as thoroughly as the phenomenon of Donald J. Trump. I don't have to go back and analyze any of those many posts to be able to tell you they're all critical of him. Trump is the living, breathing, bloviating embodiment of all that is wrong with America. He is a selfish, greedy, petty, heartless bastard who cares nothing for anyone but himself, and will not rest until his name is on the lips of every other human being. Trump has risen to national prominence not because of his lousy real estate empire, nor because of his golf courses or casinos, but solely on the sale and distribution of his name. Slap a gold "Trump" on a hotel, a steak, a bottle of wretched wine, a training course, a "reality" show, and truth be damned, the money flows uphill to the black hole of his wallet. There's never enough of it, either: last week it emerged that one of his golf courses had charged his own son's charitable foundation more money to hold an event there than was raised. Mar-A-Lago memberships are more expensive since the inauguration to capitalize on the "Pres." that can now be put in front of the Trump name.

And there I go again.

It's not just money that is sucked up by the Trumpian vortex. Would that it were: following the money, and being infuriated by it, has a far simpler dynamic. That would put this scenario in the realm of Enron. Any self-respecting rapacious mogus avoids the spotlight like a vampire stays out of the sun. When the world associates your name with exploitation, the conventional wisdom goes, your profits go in the toilet.

Not so our Shameless Leader. He boasts of how many times his picture has been on the cover of Time, oblivious to how negative the reporting that accompanies those pictures may be. He cannot abide anyone in his circle receiving similar attention, either: Steve Bannon's job in the White House was most at risk after he had a Time cover, and that may explain why son-in-law Jared Kushner has been less visible lately. Well, that and news of Kushner's own inept dealings with Russian spies.

Simply put, Trump has an insatiable appetite for media attention. It may even be that we have the dying ratings of The Apprentice to thank for his campaign: with the public losing interest in the flagship property of his name empire, he could feel himself slipping away from public adulation. What better way to get it back than to run for President--and win?

As narcissistic as Trump is, he does have a sense of how negative most of the reporting has become. Six months into his regime, we can see how that shapes his approach to foreign policy. Burnish his ego, praise his electoral victory, treat him like a potentate, stay in his hotel, and your dictator will be his best friend. Try to talk to him about genuine problems in the world, to appeal to his moral sensibility, and you'll find yourself on the receiving end of a Twitter storm. His attention span is too short for well-reasoned arguments, his mental capacity too limited to understand conclusions arrived at through scientific study of evidence.

And then there's the bellicosity of the man. He has two settings: preening and attack. If you're not a sycophant, you're an enemy. He demands loyalty of any employee he hires, and any sign of doubt is viewed as betrayal. That's why so many jobs in the administration remain unfilled: there just aren't enough technocrats in Washington, or anywhere else in the U.S. for that matter, willing to sell their souls for a chance to become Donald Trump's handmaiden.

Putting such an insatiable vortex in the most powerful office in the world has transformed the White House into a political singularity. It devours media on a 24-hour-a-day, 7-days-a-week schedule. The NPR political podcast has, since sometime in February, started with a date stamp and a disclaimer: "This podcast was recorded at 0:00 on 00/00/00. Things may have changed by the time you hear it." And that's frequently the case: listening to the podcast just hours later, I have frequently found that a new hot topic has already taken center stage, or that the developments being discussed have been superseded by new revelations.

What's an amateur pundit to do? I barely keep up as it is. My wonderful, sanity-keeping full-time teaching job is already so tiring that I rarely have the energy, once I'm home, to pound out an essay that will have any kind of currency. Add to that the sheer bewildering exhaustion of trying to keep up with all the latest developments, and from the maelstrom to pick the shiny object that, once digested and interpreted, will still be at all valuable by the time I've hashed it out and posted it, and it's just too much. I'm exhausted. Trump has sucked all the poli sci out of me.

Which is, of course, exactly how he wants it. Because, as many have pointed out since long before he was even thinking seriously about running for office, Trump is, at heart, a toddler. He wants nothing more than attention, and to a certain extent, he doesn't care whether it's the good kind. He wants to be on all our minds. He's the President, damn it! Watch him go down the slide! Watch him toot the horn of the big truck! Watch him blow up relations with our allies while cozying up to countries we've been avoiding because they have horrible human rights records!

And that, my friends, is why I've arrived at a difficult conclusion: unless I can write something edifying about an actual change in Washington that Trump is really truly involved in, I'm going to do my best to ignore him. Let him stew in his own juices, let him rail against the fake news media, let him lie circles around the smooth talkers of the GOP Congressional leadership; and let them all consume themselves. There are far better things to write about, and far better things to do than write about, that man. Summer is too short to throw any part of it down the chute to the Black Hole of Trumpdom.