Finally, a Bridge Too Far 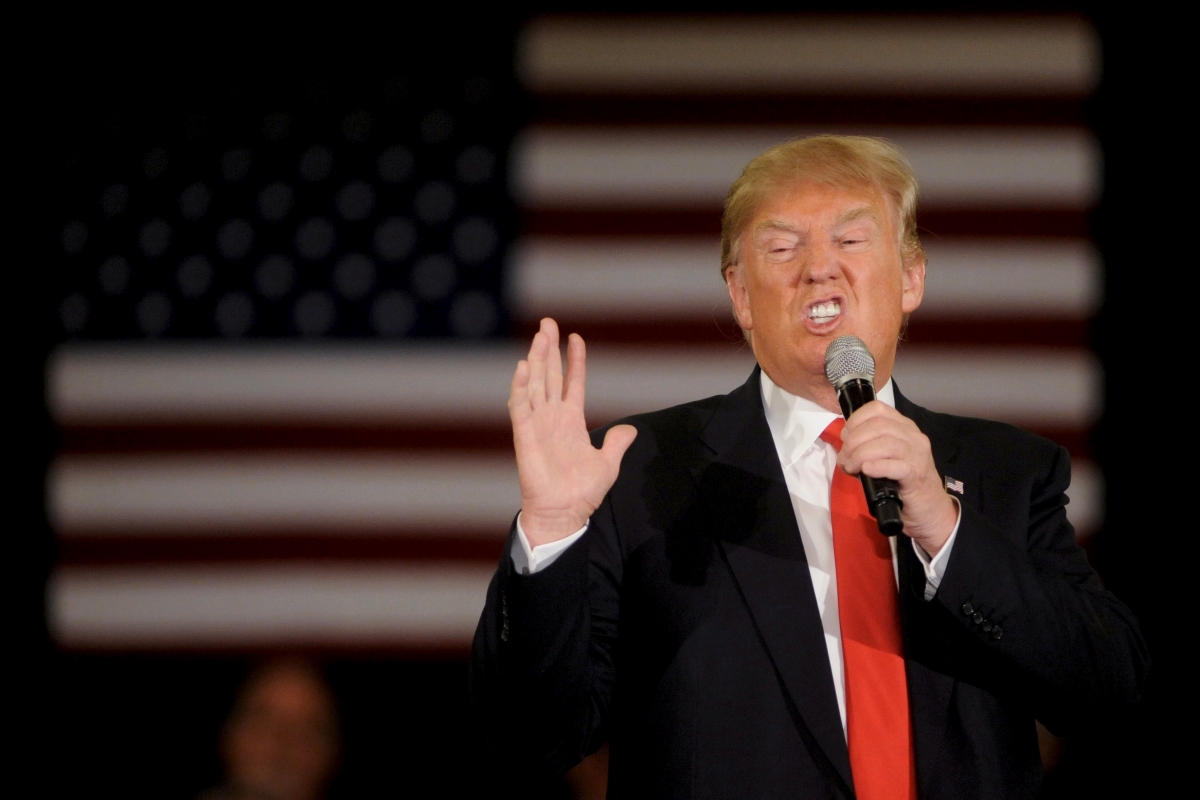 Not just this guy.

Really? This is what it takes?

Donald Trump's campaign has been off at least one of its rails as long as it's been running. Trump was never interested in being respectable, civil, eloquent, diplomatic, statesmanlike, or even coherent. He was always a loud, bellicose, attention-demanding incarnation of masculine id, with a dog-and-pony show that was irresistible to a large enough plurality of Republican voters that it overcome all the shallow business-as-usual candidates--as well as a few other wingnuts who lacked his eye-catching vulgar appeal--to bequeath him with a nomination to become the world's most dangerous head of state. His rhetoric was scattershot when it came to positions on any of the issues the serious candidates were debating, but consistent in one regard: he hated the same people as that large plurality of voters, and cared not a farthing for how his targets felt about that hatred.

The size of his following, while not large enough to constitute a majority, was always disturbing. This country has appeared to make progress toward becoming more diverse, more tolerant, more open, more humanist, as civil rights have expanded, communities of color have become more prosperous, and calls for equity have resonated with larger and larger swaths of Americans. It's important to remember, though, that much of this progress has been despite the ongoing existence of that bigoted plurality. Much of it has happened in the court, not the ballot box. And while it is increasingly reflected in popular culture, it is the young who largely dictate the attitude of the media toward diversity. Many who have been left behind--who don't care for hip hop culture, who are revolted by public displays of non-heterosexual affection, who are frightened by non-Christian expressions of faith, who hear terrorism in the voice of anyone speaking a language other than American-accented English, and whose professions and trades are being globalized or rendered obsolete by the increasingly borderless global economy--have longed for a prophetic advocate who would promise them simple protections from the things they fear most.

Trump's solutions to these problems were always simple: Expel immigrants who were already in this country, and wall off the southern border to keep new ones out. Create old economy jobs and erect trade barriers to keep them here. Torture and bomb Muslims to end terrorism. Strip non-whites of their Constitutional rights in the name of "law and order." This fascistic agenda struck a chord with that disaffected plurality, landing Trump the Republican nomination.

It could've ended there. If the party's elite--Paul Ryan, Mitch McConnell, the Congresspersons and Senators they represent, the governors and state legislators who have gerrymandered this nation to a fare-thee-well--hadn't been so desperate to put a Republican in the White House, so insistent that anything would be preferable to having a (gulp) woman in the Oval Office, especially after eight years of having a (double gulp) Black man there, this could've ended in August. Refusing to endorse the demagogue, withholding party campaign funds, saying "no" to being his running mate, speaking out against his racism, sexism, nativism, using the rules of the party's convention to end his candidacy, could have nipped it in the bud. Yes, it would've been messy, and cost the GOP the Presidential election--but then, how is that different from the train wreck that's happening now?

The elite didn't do any of these things. Instead, they shook their heads at Trump's constant invective, put it all down to the tropes of an entertainer, and endorsed him. They hitched themselves to the hellbound train, and now it's too late to break away.

And they're only doing it because finally, there's a video clip of Trump saying something appalling about women that only his most rabid followers can explain away. It's a candid admission of sexual predation, and it rings all too true for the more-than-50% of the electorate who are women. Even if Trump could've put together a large enough plurality of racist whites to squeak out a win, he can't pull it off without women.

Meanwhile, that vulgar 11-year-old claim to sexual privilege has exposed the horror lived every day by so many women and girls. I'm offended that so many of the male Republican politicians finally turning against Trump are doing it because they have to be able to face their daughters. What about their mothers, their wives, their colleagues, and much more than that, all the anonymous females, young, old, and anywhere in-between who, for no other reason than their gender, have been classified as fair game for molestation by men since the dawn of human existence?

So many women I've known and loved have been subjected to sexual abuse that I've begun to wonder if anyone is safe. In the last twenty-four hours, I've heard stories of twelve-year-olds being pawed in public places by men who then casually went on their way. Almost every woman I've ever been involved with romantically has had stories to tell of harassment, innuendo, inappropriate touching, and rape. I find myself revolted by my own gender.

I have daughters, a wife, a mother. I've heard their stories. But even if I hadn't, I would be grieving for the global disgrace that is men's treatment of women. Perhaps this (hopefully) campaign-ending abomination can finally open up a dialogue about what it really means to be a woman, and start to move the men of this country toward treating the women around them as fellow human beings rather than sexual prey.

But to get back to the even larger disgrace of Donald Trump coming so close to having a chance at the White House: one need not be Black, Hispanic, Muslim, an immigrant, or female to understand that humans ought to treat each other with kindness. The five-year-olds in my kindergarten classes already understand this. When one kindergartner starts to cry, several others cluster around that child to comfort him or her. It doesn't matter why there are tears. It absolutely does not matter what the gender, color, or ethnicity of the crying child is. The others just know someone needs a hug, and that it's not okay to hurt someone else's feelings.

If my kindergartners can understand this now, just a month into their first year of public school, why has it taken the leaders of the Republican party so long to even start to get it? Where is their empathy, their compassion, their simple humanity? Is there anything they won't sacrifice for the promise of a seat at the table of power?
Donald Trump misogyny racism Republicans sexism sexual assault sexual harassment the Wall xenophobia
Location: Portland, OR 97229, USA