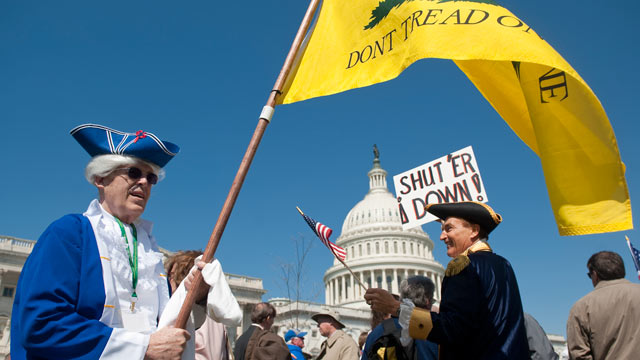 It's not just the funny hats that are rendering Republicans irrelevant.

It started with health care—at least, that’s what the movement claimed.

They showed up at town meetings that were seeking to gather a consensus on reforming the American health care system, but they didn’t come to discuss, or even to engage in constructive criticism. They came to shout and scream, to shut down the grass roots part of the process, and they succeeded. They were a tiny minority, but the volume of their protest drowned out all the hopes and dreams of the rest of America. They reacted to what they considered unconstitutional nationalization of corrupt, bloated industries that were bankrupting both individuals and collectives with the mountains of expensive red tape they erected as barriers to the product they were supposed to be delivering. Some of them dressed up in colonial costumes, others suspended teabags from wide brimmed hats, and they called themselves the Tea Party.

Over time, the movement attracted other disaffected conservatives, and the ugliness of their outcry grew to encompass immigrants. They were also united in their hatred of the first dark-skinned President of the United States. Their power far exceeded their actual numbers, because these were people who could be counted on to turn out, and to vote as a unified bloc. They could also be depended on to oppose Democratic candidates.

The Republican Party smelled opportunity, and pounced on it. By appealing to Tea Party voters in general elections—especially in non-Presidential years—the Republican Party could bring out a hard core of voters who were often enough to nudge incumbent Democrats out of office, as their own voter base was far more likely to stay home. This was fine for November elections, but primaries were different. To win the Tea Party vote in a primary, Republicans had to play the populist card, appealing to the most paranoid segments of their base.

This resulted in increasingly xenophobic candidates, many of whom succeeded in upsetting incumbent Republicans with solid conservative credentials. Over time, Congress took a hard swing to the right, and President Obama found all the immensely popular measures he had initially campaigned on, and won his first election with, stymied by a recalcitrant legislature. He still cruised easily to reelection, in large part because the minority voters who have just edged white voters out of the majority, as well as female voters, have been turned off by the GOP’s anti-immigrant, anti-government, anti-women platform.

The off-year election of 2014 again saw these same voters staying home, while the reactionary Tea Party core turned out, resulting in the Senate shifting from a Democratic to Republican majority. Emboldened by this victory, Congress has doubled down in its opposition to President Obama’s agenda, forcing him to make policy through executive orders and regulations rather than legislation. Paradoxically, this activity—or, more realistically, strident inactivity—seems likely to cost the Republicans much of what they won in 2014. The vehement xenophobia, bordering on racism, of current GOP presidential leader Donald Trump is charging up Hispanic voters, even as growing awareness of police violence against African-Americans is empowering those voters, as well.

The Republicans find themselves reaping the whirlwind. Their short-sighted coddling of low information voters has made it impossible to deny their basest instincts. This is America’s ugliest side, the citizens who fear anyone who doesn’t look like, talk like, and worship like they do, who despise their black President, who want to turn America’s southern border into a fortress, who want to expel even legal immigrants from American soil, who cry “freedom” while limiting the rights of women, who insist upon their own religious rights to prejudicially discriminate against LGBT Americans. These voters will come out on primary election day, and they will vote for candidates who run on their racist, sexist, homophobic platform: candidates who, even though they may edge past more moderate, establishment candidates in the primary, cannot win in the general election, when women, persons of color, and gay voters will elect Democrats.

The Republican reaping of the whirlwind has cost America uncounted billions that could have been improving the lives of the vast majority of Americans. It has also rendered the party irrelevant. Tea Party voters, however strident they may be in demanding the attention of Republican politicians, represent a shrinking part of America, a part that is aging out, dying off, being replaced by generations of Americans who are kinder, gentler, more accepting of diversity, who just don’t get what all the fuss is about, and who are never, ever going to vote for the Republican party in this incarnation.

The Republican victories of 2010 and 2014 were pyrrhic. In sixteen months, we who believe America’s strength lies in its diversity are going to take our country back, as the whirlwind blows away those who sought to reap its power.
GOP racism Republicans Tea Party xenophobia
Location: Mount Vernon, WA, USA